This article is part of a series where I discuss dn42, a decentralized VPN and community for studying network technologies. You can find out more about dn42 on its Wiki: https://dn42.dev/

All of my examples here use Bird 2, and assume you use the same config variables as dn42's guide: https://dn42.dev/howto/Bird2

Connecting to dn42 is fairly straightforward - after registering your resources, you coordinate with other participants to establish tunnels onto the network. However, dn42 is more than just adding peers. At some point, you may want to expand your own network to multiple machines and locations.

Before you can setup peerings from multiple locations though, your nodes first need to have a complete picture of your own network. In addition to all your external BGP connections, this requires configuring another another piece: internal BGP, or iBGP for short.

NOTE: only use this example if you do not have an IGP already set up in your network - otherwise scroll down to the next section!

At first glance, iBGP looks very similar to an external BGP session. The major difference is in that iBGP, the peer AS is the same as your own.

In the simplest configuration, iBGP must be configured in a full mesh between all routers. iBGP links do not automatically share routes received from other peers, so missing a connection here will cause routes to go missing on some nodes.

As simple as this seems, there are some important pieces to the config here: 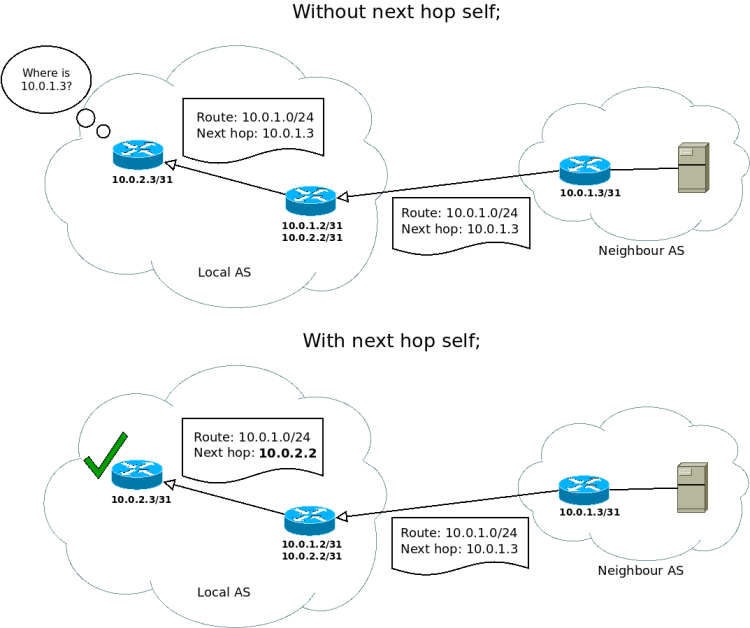 You might be wondering, why do the defaults for iBGP already differ so much from this configuration? The answer is that BGP expects that you use an interior gateway protocol (IGP) in addition to iBGP to manage routes within your network.

Structurally, these are quite different from BGP:

Although IGPs do not require a full mesh between links, having multiple paths between targets adds redundancy to your network. If one such path goes down, IGPs react fast enough that TCP connections like SSH and BGP are uninterrupted.

This fast failover provides great benefits to BGP, and it’s why iBGP sessions are set to multihop by default. If a BGP session is configured against a directly connected neighbour, and the connection to that neighbour goes down, the BGP session goes down with it. Running BGP in multihop mode means that connections to the neighbour can automtically failover to redundant routes provided by your IGP when needed.

Hans van Kranenburg has a set of networking lab exercises which covers OSPF and explains this behaviour in detail: https://github.com/knorrie/network-examples/tree/master/ospf-intro#more-dynamics 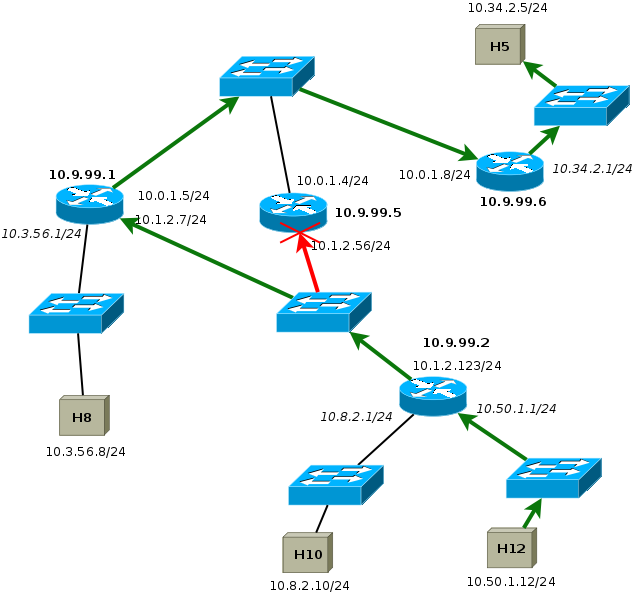 (graphic borrowed from the above link)

To send routes for BGP peering IPs through an IGP, they should be attached to an interface. This can be done by creating a loopback or dummy interface. On Linux, which one you use doesn’t make any major difference, though I prefer using a dummy interface because it creates a logical separation between default loopback IPs and those specific for dn42.

In my configuration, I set up the public dn42 IPs of my servers in loopback. This means that the IPs used in the VPN tunnels between nodes have to be something different. For those, I used link-local v6 addresses instead and IPv4 addresses in the 192.168.x.x range.

OSPF is a well-established and widely supported routing protocol. There are two versions actively in use, OSPF v2, which is IPv4 only, and OSPF v3, which supports both IPv4 and IPv6. OSPF v3 runs over link local IPv6 addresses using its own protocol type: protocol number 89.

OSPF is fairly complex, but also very feature complete. A core feature it provides is areas, which group routers into logical subdivisions and hide their details from each other. On larger networks, this saves a lot of resources by reducing the amount of routes each router has to keep track of.

For a small dn42 network, it's most likely fine to stick to the backbone area (area 0).

Note: Bird requires two sessions to run both IPv4 and IPv6 in OSPFv3. It can thus be helpful to configure areas in a separate file and use include statements.

Babel is a simple and modern protocol designed to work with minimal configuration. It supports both IPv4 and IPv6, and runs over link-local IPv6 on UDP port 6696. However, Babel is comparably new and not as widely supported as OSPF.

Two software implementations for Babel exist: the reference implementation babeld and the one in Bird. babeld adds some extension features such as generating automated cost metrics based off latency. It's possible to combine it with Bird by having Bird learn routes from the kernel routing table, but this is not something I've tested yet. In this example, I use Bird's implementation with some manually configured costs:

IMPORTANT: In these examples, I’ve set filters to clearly separate BGP and non-BGP routes within your network. This is especially important, because having an IGP and iBGP both send the same routes will lead to unpredictable behaviour. Specifically:

Note 2: when using an IGP, whether you want to use next hop self is a design choice. Although OSPF and Babel will have no problem routing the interfaces created for your peers, you may want to keep your IGP cleaner by only including prefixes that are actually yours. If you wish, you could instead add whatever interface pattern matches your dn42 peers to your IGP and remove the next hop self option.

Note 3: Because our IGP already configures costs between links, it's not necessary to configure them here too. Bird will automatically read OSPF metrics between links when computing the internal cost to a boundary router. For Babel, support for this got added in Bird v2.0.8 (next release, as of writing).

In this post, I've outlined 3 possibilities for designing your network: pure iBGP, OSPF, and Babel.

The main advantage that IGPs offer is the ability to failover BGP connections to indirect paths if a direct connection goes down. But, there's a case to be made too for a simpler network configuration using only one protocol.

My advice? Try more than one and find what works best for you.